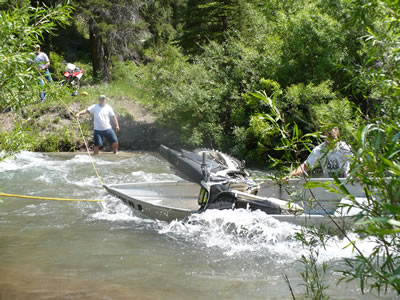 A few of my buddies and I have always wanted to climb to the peak of Dinosaur Mountain in Smoot Wyoming.  We’ve talked about doing it since we were teenagers, in fact we tried a few times and never made it.  As far as we know its has never been done before on a motorbike.  On the 4th of July weekend my friend and I decided it was time we made it, no matter what.  By the time we got to the peak we realized why it has probably never been done.  We basically had to push our bikes to the summit.  Not much of a ride, more like a hike with a 230lb pack you have to push.  There is no trail whatsoever, just large sharp rocks and a bunch of deadfall.  Although it was difficult, it was very rewarding when we finally made it to the top and cracked open a mt dew to celebrate!  It could probably be done by anyone who is any good at riding a bike, but they need to really want to get up there and have a lot of energy/motivation.  On the way back we dropped off the ridge too soon and we got stuck in a canyon with only one way out, by crossing a large river that was very swift.  There is no way we could have crossed the river (I know this because I tried last year on my 450 and it sunk and nearly got flushed away) so we left our bikes and walked all the way out of the canyon to the nearest house and got some help.  We ended up carrying a boat to the river and floated our bikes across so we could get home.  Here are a few pics from the ride.